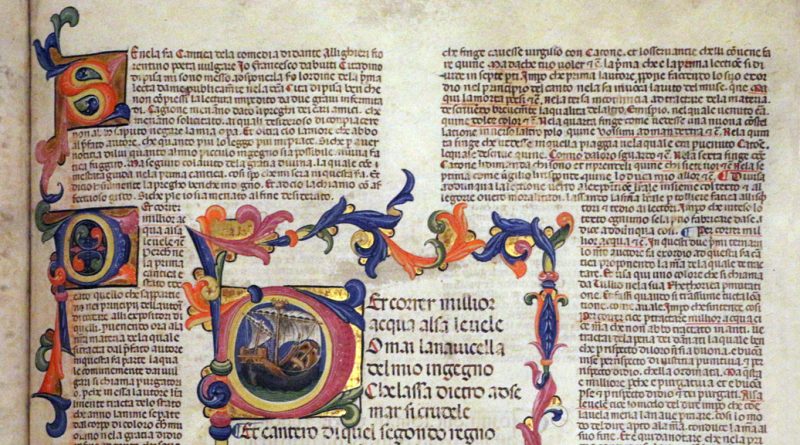 The official language of Italy is Italian, spoken by about 59,000,000 people, but regional languages do coexist with the standard language. Therefore, part of the population are native bilinguals of Italian and a regional language, and some of them may use Italian only as a second language.

Italian is a Romance language and a direct descendant of Latin, more precisely, vulgar Latin. Today’s Standard Italian is based on the Tuscan language of Florence of the 14th century. The impulse towards an Italian linguistic standard was given by such authors as Dante Alighieri, Petrarch and Boccaccio, who all wrote in their native Tuscan and scholars like Pietro Bembo.

Due to the political and cultural importance of Florence in the 14th century, Tuscan soon became a lingua franca for cultured Italy and no alternative ever disputed Tuscan’s position as a national language.

The first Italian grammar (presumably) compiled by Leon Battista Alberti was a hand-written manuscript of 1454 with the title Regole della Lingua Fiorentina (Rules of the Florentine language), a first attempt to codify the vernacular language in order to challenge the literary supremacy of Latin.

Note, however, that today’s Tuscan pronunciation is quite different from Standard Italian, especially the ‘g’ sound which resembles an aspired ‘h’.

Another quite large community of some 350,000 people in Friuli speak Friulian, a Rhaeto-romanic language, spoken in the Udine Province, extending to the provinces of Gorizia and Venice.

Piedmontese, a language with considerable French influence distinct enough from Standard Italian to be considered a separate language spoken in Piedmont (Nord-west italy), (except for the Provençal- and Franco-Provençal-speaking Alpine valleys). It is also spoken in Australia and the USA.

Ladin (ladino), a Rhaeto-romance language, is spoken by 35,000 italians living in the Dolomite mountains, in the Trentino-South Tyrol region and in the Veneto region.

Ligurian, a language closer to Piemontese, Lombard, and French than to Standard Italian.

Lombard, a language very different from Standard Italian. A group of dialects (Milanese, Bergamaso, etc.), some of which may be separate languages. Western Lombard dialects (of Ticino and Graubnnden) are inherently intelligible to each other’s speakers. Speakers in more conservative valleys may have to use some kind of ‘standard’ dialect to communicate with speakers of other dialects of Lombard.

Neapolitan-Calabrese (Napoletano-Calabrese), spoken in the Campania and Calabria provinces, in southern Italy. Alternate names: . Dialects include Napoletano (Neapolitan, Tirrenic), and Northern Calabrese-Lucano (Lucanian, Basilicatan). Southern Calabrian is considered to be a dialect of Sicilian. Neapolitan and Calabrese are reported to be very different from each other.

Venetian, a language distinct from Standard Italian spoken in Northern Italy, in the city of Venice, and the area of the Tre Venezie; as well as in parts of Venezia Eugànea, Venezia Tridentina and Venezia Giulia, including Trieste. Bisiacco, one of the dialects of Venetian, is spoken in Gorizia Province. Other dialects include Istrian, Triestino and Venetian Proper. Venetian is also spoken in Croatia and Slovenia.

Sicilian (Calabro-Sicilian, Sicilianu, Siculu) is distinct enough from Standard Italian to be considered a separate language. Dialects include Western Sicilian (spoken in Palermo, Trapani and Central-Western Agrigentino), Messinese, Pantesco, etc. Pugliese and Southern Calabrese are reported to be dialects of Sicilian.

Mócheno, a language related to Bavarian and Cimbrian and spoken in Valle del Fersina (Trentino) by about 1,900 italians. Speakers can partially understand Bavarian, Cimbrian, or Standard German. Dialects include Fierozzo (Florutz), Palú (Palai) and Frassilongo (Gereut).

Minority languages are languages that are official national languages in other countries and are spoken by local minorities within Italy, such as, for example, German and Slovene. They are therefore different from Italy’s regional languages, which are specific to Italy.

From the Roman Empire to the today’s Italian Republic, Italy is one of the nations that has seen the most drastic changes in its territory. This together with the fact that it lies at the center of Europe and has known successive waves of invasions explains why, apart from standard italian, there are so many minority languages spoken in Italy. German, Slovene and Griko (a variant of Greek), for example are spoken by minority groups in different areas of Italy.

Minority languages that are the national language of another country or variants thereof:

– German, spoken in the province of South Tyrol in the North of Italy, and in north-eastern Italian regions, previously under influence of the ancient Austrio-hungarian empire and awarded to Italy after WWI. In total about 300,000 Italians speak German as their first language.

– Slovene is spoken by about 80,000 italians living in the north-eastern region of Friuli-Venezia Giulia near the border with Slovenia.

– Molise Croatian, a diaspora dialect of Croatian, which can be found in the villages of Montemitro, San Felice del Molise, and Acquaviva-Collecroce in the southern Molise region of central-south Italy and counts some 3,500 speakers. They are the descendants of a group of people who migrated from the Balkans in the Middle Ages.

– Arbëreshë Albanian: spoken by 80,000 to 100,000 italians in several pockets in Avellino, Potenza, Taranto, Cosenza, Catanzaro, and Palermo provinces in Southern Italy and in central Sicily, as a result of past migrations.

– Italiot Greek (Graecanic, Griko), an endangered language with only 15000-20000 speakers left, most of them aged over 50, in two areas of Southern Italy, Grecìa Salentina in Puglia and Bovesia or Grecìa Calabra, in Calabria. Considered to be one of the last surviving traces of the region’s Greek heritage, the ancient Magna Graecia (when Greek colonists reached Southern Italy and Sicily in the 8th and 7th centuries BC) by scholars like the linguists Gerhard Rohlfs and G. Hatzidakis, this is a language quite different from Modern Greek, with traces of ancient Doric, Byzantine Greek and Italian, as well Romance dialects.

Others, like the Italian researchers O. Parlangeli and G. Morosi, support a more “recent” origin dating to the hellenic immigration of the Middle Ages. According to a third hypothesis the medieval immigration merely reinforced a pre-existing greek-speaking community that was already present since Antiquity.

Minority languages that are the official language of a region in other countries or of a community, not specific to Italy )

– Some 15,000 Catalan speakers reside around the area of Alghero in the north-west corner of Sardinia – believed to be the result of a migration of a large group of Catalans from Barcelona in ages past.

Even today, variations in local accents allow people from one town to distinguish people from a neighboring town, which may be only a few miles away. The arrival of immigrants has also generated a plethora of new languages, including Arabic, Hindi, Punjabi, Urdu, Turkish, Kurdish, Mandarin Chinese, and others.

Countries which have Italian as their official language

Italian is also the (or one of the) official language(s) of the following countries:

Other Countries where Italian is spoken:

Italian is also widely known and taught in Monaco and in the neighbouring island of Malta and served as an official language of the country until English was enshrined in the 1934 Constitution. It is also widely used in France (Corsica and Nice) and in Albania.

A number of languages formerly spoken and written in Italy no longer exists today, but evidence of their past existence can still be witnessed in Museums and archelogical sites, especially in Tuscany and Umbria. These languages are considered extinct or dead languages today. More about the extinct languages of Italy.