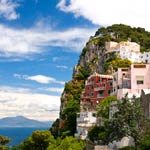 May is a wonderful month to discover or revisit the islands of the Neapolitan archipelago. In Spring the islands of Capri, Ischia and Procida are not yet flocked with tourists, while temperatures are already nicely warm, without getting too hot. Flowers are in bloom and the trees, shrubs and grasses are at their greenest and most beautiful. 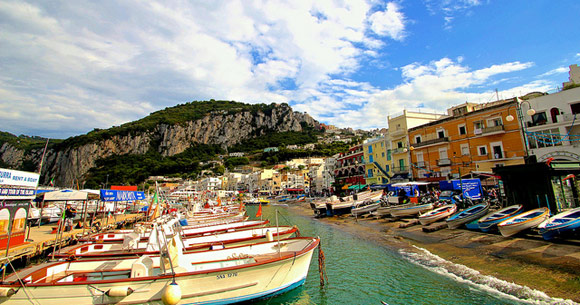 Ideally situated off the Sorrentine peninsula, with its mild climate and luxuriant vegetation, Capri is one of the most enchanting little islands of Italy. It is not difficult to understand why the “island of dreams” became a favorite retreat among the 19th century poets, princes, and artists, in search of solitude and inspiration. 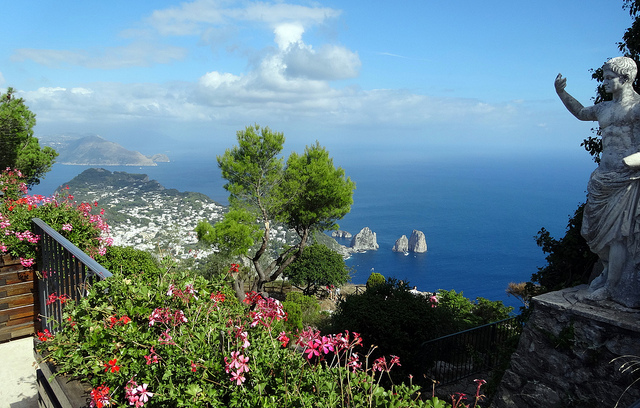 As the Roman poet Statius wrote about Capri in the 2nd century A.D.:

Mild winters and cool summers temper its
climate, its shores are lapped by the sluggish waters
of a harmless sea. Peace untroubled reigns there,
and life is leisurely and calm, with quiet undisturbed
and sleep unbroken.

The island counts two small towns: Capri town and Anacapri. Capri town looks like a theater setting with its small, intimate square, known as the Piazzetta, its small white houses and palaces and narrow alleys. It is both the local center of the island and also the fashionable meeting point where people gather to see and be seen.

One of the most striking sights of Capri are the Faraglioni, three limestone stacks jutting out of the sea, measuring from 82 to 109m. 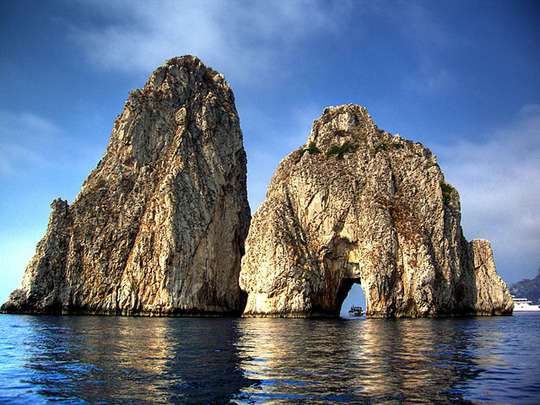 The best spot to admire Capri’s Faraglioni is from the Belvedere of Punta Tragara. On the way to Punta Tragara, along via Tragara, you come across some of the most famous villas of the island: Villa Discopoli, home of Alice Fähndrich, where the poet Rainer Maria Rilke stayed during the winters of 1907 and 1908 and Villa Lo Studio residence of the Chilean poet Pablo Neruda in 1952, during his exile in Italy. Neruda’s stay in Capri was fictionalized in Antonio Skarmeta’s 1985 novel Ardiente Paciencia, which inspired the popular film Il Postino (actually filmed in Procida and Sicily). 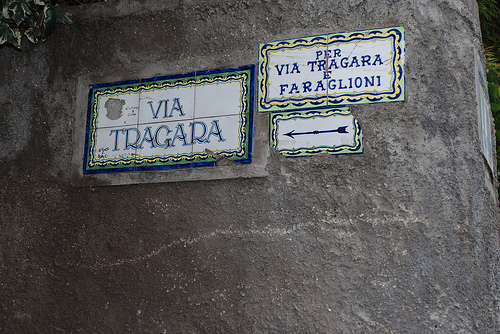 Like Rainer Maria Rilke, you might prefer the more authentic and less crowded Anacapri over Capri, a delightful little village on the other side of the island.

SONG OF THE SEA

Timeless sea breezes,
sea-wind of the night:
you come for no one;
if someone should wake,
he must be prepared
how to survive you.

Timeless sea breezes,
that for aeons have
blown ancient rocks,
you are purest space
coming from afar…

Oh, how a fruit-bearing
fig tree feels your coming
high up in the moonlight.

From the Punta Tragara there is a nice walk, the Pizzolungo path, along the coast with approximately 775 steps leading to the Grotta Bianca and Natural Arch.

Another famous writer’s villa, Villa San Michele, is located between Capri and Anacapri, at the top of the Phoenician steps, which connect the center of Capri with that of Anacapri. It was built by the Swedish psychiatrist and writer Axel Munthe on the ruins of the Roman Emperor Tiberius‘s villa. The gardens offer panoramic views over Capri town and its marina and the Sorrentine peninsula.

On the top of Monte Solaro above Villa San Michele are the ruins of Castello Barbarossa, a fortification dating to around the year 1000 named after the Ottoman corsair Khair-ed-Din (or Hayreddin), who captured Capri in the 16th century and reconstructed the castle. Muthe, who was a noted animal lover, bought this part of the mountain above his villa to protect its birdlife. Today, it is a natural oasis, watched over by the Capri Bird Observatory. The story of the villa is recorded in Dr. Munthe’s memoirs The Story of San Michele, published in 1929. His interweaving of the villa’s story with Italian history, mythology, and culture is beautifully reminiscent of 18th- and 19th-century travelogs.

You can also take the chairlift from Piazza della Vittoria in Anacapri to the summit of Monte Solaro, which takes about 12 min and offers a beautiful panorama over the whole island and the Bay of Naples. 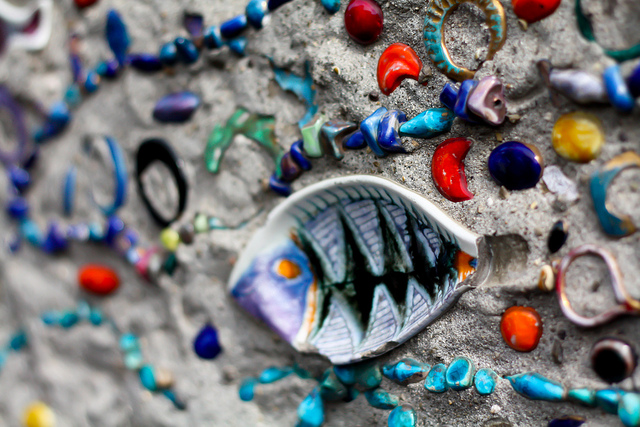 A trip to Capri would not be complete without a visit to the Blue Grotto (Grotta Azzura), a wonderful marine cave where the light refracted by the water produces an dazzling blue color, hence the name. The cave can be reached by motorboat from the port of Marina Grande, by bus from Anacapri, or by taxi. The German poet August Kopisch (re)discovered the cave, while out swimming with his friend and painter Ernst Fries. Actually, the cave was already known by the ancient Romans as proven by the statues that were found inside it, but fell into oblivion in the middle ages.

Last but not least, the spectacular Via Krupp, carved into the rock by the son of the eponymous German steel, offers breathtaking views over the Faraglioni, the Marina Piccola and the Punta Ventroso.

The smallest and most authentic of the three Parthenopean islands, less crowded than Ischia and less famous and sophisticated than Capri, Procida is a little jewel. With its secret bays, small fishers hamlets and brightly colored Mediterranean architecture, the island is a little photographer’s paradise. The many testimonies by Roman poets and historians who praised the island show that it was as famous as Capri and Ischia in ancient times. It was cited by Virgilius who called it “high” and by Statius who defined it as “aspera” (steep). 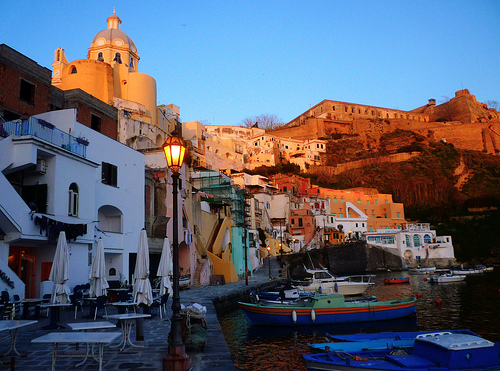 With its beautiful panoramas and its typical Mediterranean architecture, the island has been chosen as a film set for numerous films, among which Il Postino, a fictional story about Pablo Neruda’s years of exile in Italy. Some scenes of The Talented Mr. Ripley were also filmed here.

Several authors have set their novels in Procida. One of the most notable ones is L’isola di Arturo (1957), one of the greater works of Elsa Morante, who was exiled to Procida during the Second. World War for her anti-fascist activity. The novel Graziella by Alphonse de Lamartine is believed to be largerly autobiographical and recounts the author’s youth love with a poor fisherman’s girl on the island at the beginning of the 19th century.

Few islands host such an eclectic offer of different sights on such a small territory: hot springs, gold-sand beaches, museums, citrus groves, pine woods, vineyards producing the white or red Epomeo wine, and a renowned gastronomic culture. Known as the Emerald Island because of its luxuriant vegetation, it is also the largest of the three Neapolitan islands.

The capital is divided into two parts: Ischia Porte and Ischia Ponte (once known as borgo di Celsa), linked by an avenue lined with cafés and fashionable shops.

Not to be missed is the Aragonese Castle (Castello Aragonese). Set on its rocky islet, the castle is linked to Iscia Ponte by a 220m-long bridge. Other interesting sights include Forio, a dazzling white little town, renowned for its wine, Sant’Angelo, a small fishing village and Barano d’Ischia.

A one hour-and-a-half walk leads you to the summit of Monte Epomeo and back, where you can enjoy a wonderful view over the Bay of Naples and the entire island.

Lamartine went into retreat here to write his History of the Girondists. The Anglo-American poet W.H. Auden summered in Forio d’Ischia between 1948 and 1957. One of the first poems he wrote here was In praise of limestone.

I am presently moved
by sundrenched Parthenopea,
my thanks are for you, Ischia, to whom a fair wind has brought me
rejoicing with dear friends
from soiled productive cities.
How well you correct our injured eyes, how gently you train us to see things
and men in perspective
underneath your uniform light 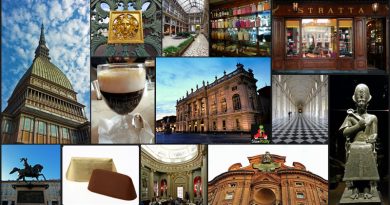 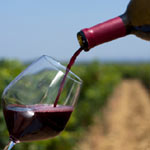 3 thoughts on “The 3 poets’ islands in the Gulf of Naples: Capri, Ischia and Procida”