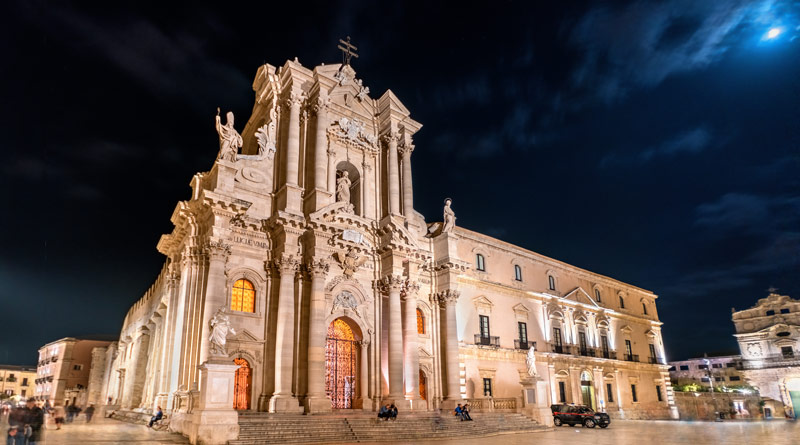 The modern day celebration of Santa Lucia (Saint Lucy’s Day) on December 13 is generally associated with Sweden and Norway, but is also observed in some parts of Italy, where it is actually a very ancient tradition that dates back to 1337.

The feast is a Catholic celebrated holiday with roots that can be traced back to Sicily. St. Lucia is the patron saint of the city of Syracuse. She is also the patron saint of a great number of other comunes in Italy: Piedmont, Campania, Marche, Sardinia, Emilia-Romagna, Lazio, Liguria, Abruzzo, Veneto, Lombardia, Trentino-Alto Adige, Calabria, Molise, Fruili Venezia Giulia and Tuscany. Although no sources of her life exist other than in hagiographies, St. Lucy is believed to have been born in Syracuse in the year AD 283 and suffered a martyr’s death in AD 304.

Indeed, when Pope Gregory established his Gregorian calendar (which is still in use today) in 1582, he deleted ten days from that year, which brought the solstice back to December 22, the same date it had been in 325, when the Catholic Church was founded. However, many Protestant countries initially objected to adopting this Catholic innovation. It took, in fact, 400 years, to have the gregorian calendar adopted all over the world (even today many communities in the world still use different, more ancient, calendars in parallel).

Scandinavia did not adopt the Gregorian calendar until the 1700s, so Santa Lucia’s day remained the longest night of the year, coinciding with Winter Solstice. So, while the world gradually changed from a Julian to a Gregorian calendar system, and, as a consequence, acquired a new date for the Winter Solstice, St Lucy’s Day was kept at 13 December, and not moved to the 21.

Still, it is possible to reconcile both statements if “the shortest day” is interpreted as the day of the year with the earliest sunset (at least for countries in the Northern hemisphere).
In fact, it is very difficult to determine the actual date of the Winter solstice without modern equipment. The day itself is not noticeably shorter than the days leading up to and following it and the days of the latest sunrise or earliest sunset do not coincide with the Winter solstice.

Possibly, the origin for the choice of date for Santa Lucia’s feast day is to be found in the fact that it falls 12 days before Christmas. The custom of starting celebrations 12 days before Christmas (Advent) and ending them 12 days after Christmas (“The Twelve Days of Christmas”) is known in several Northern-European countries, with various ancient cults falling around that date, such as the Icelandic Yule Lads appearing on December 13 and the end of Christmas being celebrated with bonfires and fireworks on January 6. Similarly, in Italy the tradition of La Befana on January 6 is a big part of Italian Christmas celebrations.

This specific timing, and her name meaning light, are important factors in the particular devotion to Saint Lucy, as both her name and the way she is represented points towards the celebration of light or solar worship.

Santa Lucia is celebrated as a festival of light, marking the return of daylight as the season progresses in Scandinavian countries and in Italy, but emphazising a different part of the martyr’s legend.
In Scandinavian countries, young girls dress as the saint in honor of the feast. The candles symbolize the fire that refused to take St. Lucia’s life when she was sentenced to be burned. Women sing a Lucia song to the melody of the traditional Neapolitan song Santa Lucia (but the Swedish lyrics are different), one of the four most popular Neapolitan songs of all-time.

Lucia meaning light, Santa Lucia is also the patron saint of the blind, the eyes, the electricians, the oculists and the stonemasons, and is often invoked for eye diseases. As the patron saint of sight, she is also sollicited for sight problems, such as myopia, astigmatism, presbyopia or blindness. In iconography and in paintings Saint Lucy is often represented holding her eyes on a golden plate for this reason. Saints are often represented with the instruments of their martyrdom, but in the case of Lucia, she is shown with the object with which she is identified by her name, derived from Lux, meaning light.

In Italy, a special devotion to St. Lucy is present in the regions of Lombardy, Emilia-Romagna, Friuli, Veneto, Trentino-Alto Adige, in the North of the country, and Sicily, in the South. In traditional celebrations, Saint Lucy comes as a young woman with lights and sweets.

In Nothern Italy, Santa Lucia is celebrated similarly to the Saint Nicholas tradition. She arrives in the company of a donkey and her escort, Castaldo and brings the good children gifts in the night between December 12 and 13. Children are asked to leave some coffee for Lucia, some flour for the donkey and bread for Castaldo. They must not watch Santa Lucia delivering these gifts, or she will throw ashes in their eyes, temporarily blinding them. Possibly this tradition stems from the 14th century when, according to the legend, a brutal eye epidemic plagued the children of the city of Verona. At their wits’ end the parents decided to organize a barefoot pilgrimage to the Saint Agnese church (formerly in the St Agnese district of Piazza Bra), dedicated to Santa Lucia. To convince the children, scared off by the cold, to partake in the procession, the parents promised them that at their return home the Saint would have brought them treats and presents. That perspective convinced the children to follow their parents despite the bitter cold, and soon the epidemic was brought under control.

The city of Siracusa honors Saint Lucy every year with a week long celebration with festivities and fireworks, sweets and the vow not to eat pasta or bread. There are two processions, one on the 13th and another on the 20th of December, during which a procession with the silver statue of Santa Lucia by sculptor Pietro Rizzo (1599) is paraded through the streets. The Saint is also celebrated on the first and second Sunday of May.

Cuccìa is eaten in memory of Saint Lucy’s miraculous averting of famine. According to the legend the Saint rescued the Syracusans when two ships, loaded with wheat, miraculously arrived in Syracuse, affected by a harsh famine. The starving population was so desperate to eat that they boiled the wheat and ate it simply dressed with olive oil. This was the first cuccìa ever made. The sweet cuccìa was made by adding cooked wine or honey. It is said that the large grains of soft wheat are representative of her eyes and are a treat only to be indulged in once a year. Later on, chickpeas and fava beans were added to the recipe. Every town and every home in Sicily has its own recipe for cuccìa. For cuccìa recipes, see: http://siciliancookingplus.com/delicacies/08_cuccia.html

A painting by Caravaggio (in 1608) representing the burial of Santa Lucia was commissioned to decorate her tomb in the Church of Santa Lucia. According to the tradition, the Church was built on the very spot were she was martyred and buried.