The Veneto region is a land of contrast with a territory going from the Adriatic coast, over the Lagoon and Veneto plain, to Lake Garda and the Dolomites.

Historically, the Veneto region has been exposed to many influences, among which the Frankish, Roman, Byzantine and Austrian cultures. 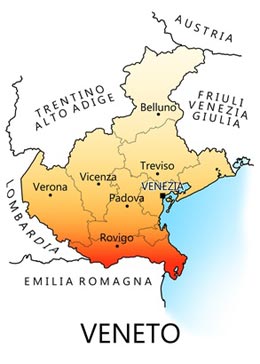 2. Planning your trip to Veneto

Top Cities to visit in Veneto
(in alphabetical order)

When to visit Veneto

Around February-March if you want to attend the Carnival of Venice. Otherwise, May, June and September are excellent months to explore the region. Note that Venice can get foggy in late Fall, Winter and early Spring.

It renders Venice very atmospheric and mysterious, but it can also be depressing for some people. So, if you want to see a ‘clear’ Venice best is to avoid the period from November to March. Unfortunately, Venice also suffers from overtourism during the summer months, so the ideal slot would be a compromise between the two.

The climate of the Veneto region is not uniform, but changes according to the area. Continental on the plains, the climate is milder along the Adriatic coast, around Lake Garda and in the hilly areas. The lowlands are often covered by thick fog.

The contrasting landscape of the Veneto region is reflected in its foods, ranging from the large variety of fresh fish along the Adriatic sea, over truffles from the Bèrci hills, chestnuts from the Belluno Dolomites and lower slopes of Monte Grappa, maize and rice in the plains, olive oil from Lake Garda and mountain cheeses like Montasia,

Veneto is known for risotto in various flavors according to the location. Fish and seafood-based risotto, such as risotto al nero di seppia (risotto with cuttlefish and black ink) are common closer to the Adriatic and vegetable-based risotto, with asparagus, radicchio or frogs’ legs, are typically seen further away from the coast. In other parts of Veneto, polenta is the primary source of carbohydrates. Beans, peas and other legumes are seen in these areas, with pasta e fagioli (beans and pasta} and risi e bisi (rice and peas).

Ingredients such as stockfish or simple marinated anchovies are part of the Venetian cuisine as well. Brodo di pesce (fish soup) is a typical Venetian dish served all along the coast.

Atypical as compared to the other regions of Italy is the use of exotic spices and raisins in the Veneto cuisine, as well as heavy dishes with sauces. Sausages such as sopressata and garlic salami are common. Typical vegetables from the Veneto region include the radicchio rosso from Treviso Igp (a kind of burgundy-red and white-stripped chicory), and asparagus from Bassano del Grappa.

The most notable dish of Veneto is fegato alla Veneziana, thinly-sliced liver sauteed with onions.  The famous Tiramisù dessert probably originated in Veneto, more precisely in Treviso, although its exact origin is still a matter of conjecture.

Veneto is an important wine region with its 75314 ha of vineyards and 20 DOC wines. It counts four of the top 10 appellation wines in terms of volume. Among the best wines of the Veneto region are whites like Soave DOC, Recioto di Soave DOCG, Prosecco, Tocai Italico and Bianco di Custoza. Reds include Valpolicella DOC, Bardolino DOC, Amarone, Cabernet Franc, Merlot (an originally French variety that was first introduced in Italyin the Veneto and the famous passito wine Torcolato di Breganze. The majority of the wines from this region are light and simple.

Influenced by the many invaders and trade contacts with the East, Venice and the Veneto developed their own architectural style, known as Venetian Gothic: a mixture of Byzanthine domes, Islamic minarets and European Gothic pointed arches and quatrefoils. Baroque influences in the 17th century were tempered by Palladian restrained interpretation.

The Grand Canal in Venice offers a concentration of Venetian architecture. Other architectural highlights are the San Marco Cathedral and the Palazzo Ducale.

An example of Paladian architecture is the Villa Barbaro. Paladian style can further be seen along the Brenta Canal and in Vicenza, with Paladio’s famous villa La Rotonda.

Apart from Standard Italian, Venetian is spoken in the Veneto region, more specifically in the city of Venice, and the area of the Tre Venezie; as well as in parts of Venezia Eugànea, Venezia Tridentina and Venezia Giulia, including Trieste. Bisiacco, one of the dialects of Venetian, is spoken in Gorizia Province. Other dialects include Istrian, Triestino and Venetian Proper. Venetian is also spoken in Croatia and Slovenia.

An archaic language known as Venetic was spoken in pre-Roman Venetia. The Venetic language is attested by approximately 350 inscriptions covering a span of five hundred years going from ca. the 6th century to the 1st century BC. Venetic is a member of the Indo-european language family, though probably not of the Italic branch, which sets this language apart from the other Romance languages and Venetian. The original Venetic script is based on an alphabet of Etruscan origin. See also: Extinct languages of Italy.

5. Festivals and Events in Veneto

Palladio, the famous Venetian architect is considered the most influential architect in the history of Western architecture. He designed many palaces and churches, but is especially known for Palladio’s his villas. The palladian villas are located mainly in the province of Vicenza, while the palazzi are concentrated in the city of Vicenza and the churches in Venice. A number of his works are now protected as UNESCO World Heritage Sites.

Marco Polo was a Venetian merchant and explorer of Persia, India, and China who wrote of his travels.

Antonio Salieri, composer and conductor who became the Austrian imperial Kapellmeister from 1788 to 1824.

Tintoretto (real name Jacopo Robusti) was one of the greatest painters of the Venetian school and probably the last great painter of Italian Renaissance.

Titian or Tiziano Vecellio was the leader of the 16th-century Venetian school of the Italian Renaissance.

Titus Livius known as Livy in Englis (ca. 59 BC at Padua – 17 AD ) wrote a monumental history of Rome Ab Urbe Condita, from its founding (traditionally dated to 753 BC) through the reign of Augustus.

Carnival of Venice: history and meaning of the different types of Venetian masks
Teatro Olimpico in Vicenza
Top 8 Venetian bridges with the most unusual names
Squero San Trovaso: where Venetian gondolas are born

9 thoughts on “Veneto: Where to stay and What to do”