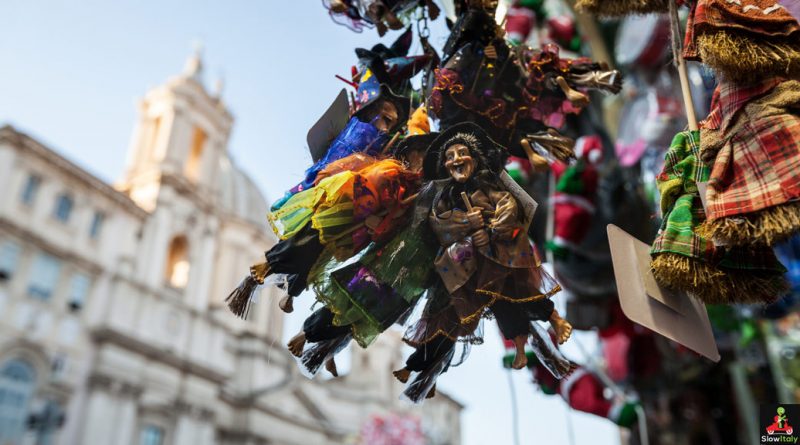 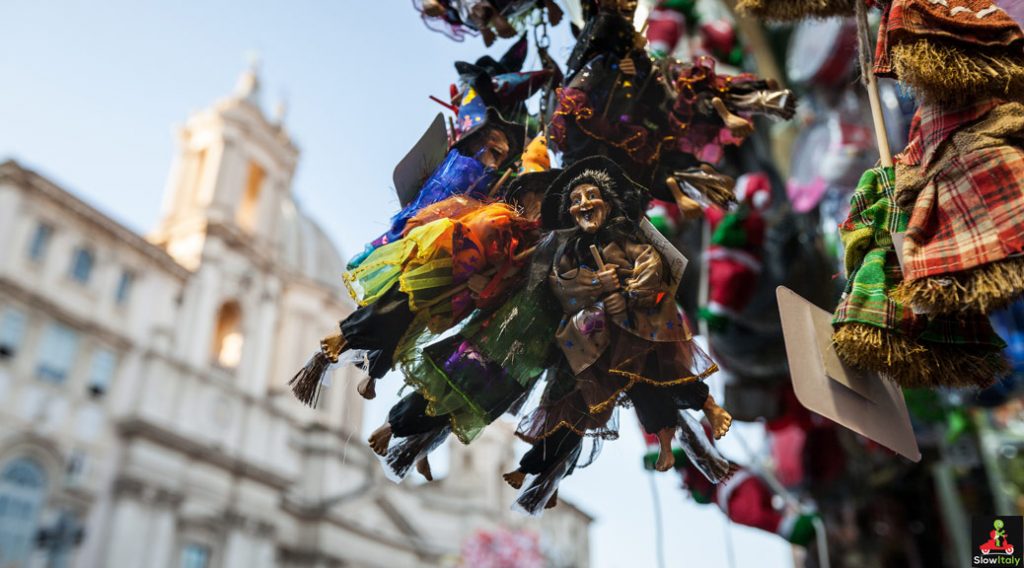 In the Italian folklore, la Befana is a kind, ugly witch on a broomstick who delivers gifts to children throughout Italy on Epiphany Eve (the night of January 5) in a similar way to Saint Nicholas or Santa Claus. 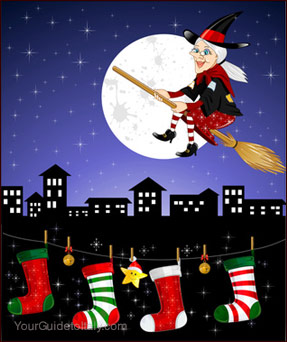 Epiphany corresponds to the 12th day of Christmas when the three Wise Men arrived at the manger bearing gifts for Baby Jesus.

The name Befana is derived from the word befania, a latin vulgarization of epifania. The traditional Christmas holiday season in Italy ends with Epiphany.

According to the legend the three Wise Men were in search of the Christ child when they decided to stop at a small house to ask for directions.

Upon knocking, an old woman holding a broom opened the door. The old woman was unaware of who these three men were looking for and could not point them in the right direction.

She kindly offered food and shelter for the night, as she was considered the best housekeeper in the village, with the most pleasant home.

The Three Kings rested and that night they told her about the Prophesy of the Divine Child.

Prior to leaving the three men kindly asked the old woman to join them on their journey, but she declined replying that she had too much housework to do.

After they had left she had a change of heart and decided to go and catch up with the kind men. She packed up her sack full of handmade gifts and food for the Divine Child.

She hopped on her broomstick and tried to catch up with the Three Wise Men, but she got lost and never found the manger.

Thinking of the opportunity she had missed the old woman stopped every child to give them a small treat in hopes that one was the Christ child.

Each year on the eve of the Epiphany she sets out looking for the baby Jesus. She stops at each child’s house to leave those who were good treats in their stockings and those who were bad a lump of coal.

Children hang out their stockings near the open fire or a window on the evening of January 5 waiting for the visit of La Befana.

A national Befana festival is held each year in the town of Urbania in the Province of Pesaro within the Marche region, usually between January 2 and 6. The town’s windows are dressed with hundreds of socks, while acrobats in Befana outfits climb down the town’s (bell) towers. See: National Befana Festival in Urbania.